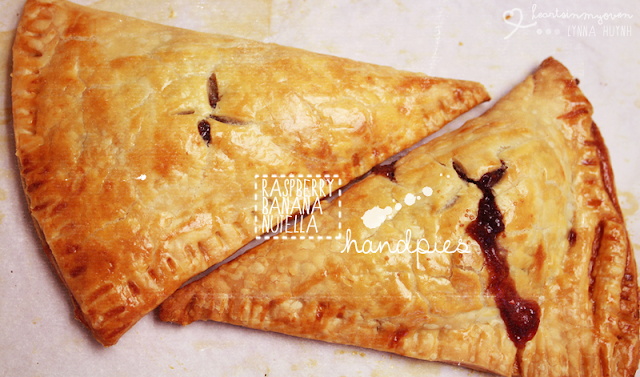 One night, I was about to drift off to sleep when I thought about eating these hand pies. I had raspberry jam. I had bananas. I had a jar of nutella. You get where I`m getting at, right? I said, “Why not?” to myself and fell asleep.

The next day I was thinking about this again. Since I was more…um, let`s just say right in my mind, being fully awake and not dead-tired-because-of-school and all. I had originally thought of making this with puff pastry, because C`MON, PUFF PASTRY IS SO GOOD (not, so much for our health, but eh, we shall think about this after we eat). However, I was also thinking, it`s a hand PIE, so why didn`t I think about making this with pie dough…? Puff Pastry vs Pie Dough showdown it was. (Well, at least in this scenario.)

I`m going to confess that I`m a cheat sometimes. I love to eat, but most of the time, I like finding shortcuts when I can since I don`t have all the time in the world. Sooo…I usually always have frozen puff pastry and frozen pie dough in my freezer. So bad, I know. I WILL make my own some day, when I`m feeling adventurous.

I made some with the puff pastry, then I made some with pie dough, following the same exact steps for each: Raspberry jam, then nutella, and finally, a few slices of bananas. Quickly made an egg wash to brush the tops, and in the oven they went!

This was so easy to make, I don`t even think a recipe is needed! It`s more of a combination idea for people to try out, if they felt intrigued.

Showdown results: Pie dough wins! I felt the pie dough`s texture tasted better. But! My sister, D, liked the puff pastry. Since she is one of my taste-testing guinea pig, I have to value her opinions. LOL. I really enjoyed the combination of the jam, nutella, and bananas.