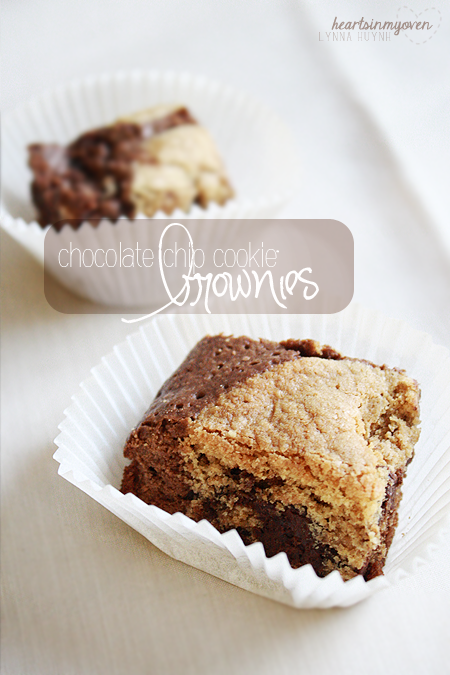 One day I was shopping at Target, walking down the baking aisle, and this caught my eye. It was a box mix for cookie brownies. I was like, “whatttt?” I thought the idea was similar to something I`ve seen before… So, I resisted buying the box mix because I thought I`ll just recreate it at home.

I did! 🙂 When I started to do more research on it, I realized this was going to be hard…because most chocolate chip cookie recipes have a shorter baking time compared to brownies. I was stumped. But, I didn`t let it get to me and decided to try it out anyways.

I wouldn`t say this was the greatest thing I`ve made. However, it wasn`t bad. It was just okay, bordering good. Haha. The only reason I wanted to make this in the first place was because my ex-boyfriend was SO intrigued by that box mix! He and his roommates definitely enjoyed it. It`s too decadent for my liking, though.

I`m not going to post the recipe, since I don`t think it`s good enough. And I`m not too keen on attempting this again to perfect it since I couldn`t eat it all myself! 😛 Also, all I did was combined two recipes together, baked it in a 9inx9in pan for about 25-30 minutes. For some reason, I never thought to Google recipes for this idea…food blogger fail… I know, I know. But, I want to share this idea/creation with you, if you have never heard about it before! 😀

Although, I did recently and discovered a few recipes if you want to give this a try!

Here is a few cookie brownie recipes if you want to attempt this creation at home:
– Simple Nourished Living
– Betty Crocker
– Baked By Rachel