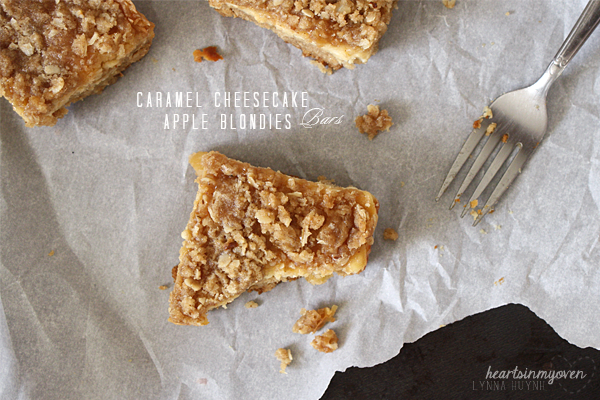 I have another exciting post and recipe today! It`s full of deliciousness, too. 🙂

Last December, I entered a creative contest Shelly from Cookies & Cups and Kristan from Confessions of a Cookbook Queen hosted. I made some cute Christmas cupcakes for it.

Well, they`re hosting one again and I love reading both their blogs…so I decided to enter again! Yay!! For this contest, we are required to take one of their recipes “put a spin on it.” I looked through their recipes and got my creative juices flowing…and TA-DA. These were born.

They have an apple blondie base, a caramel cheesecake layer, and topped with streusel. I hope it sounds as good to you as it does to me! 🙂 The apple and cinnamon smell in the blondie is incredible. Then, the caramel cheesecake parts give you that sweet caramel taste to go along with the apple…ugh, it`s really just a magnificent bar. 😀 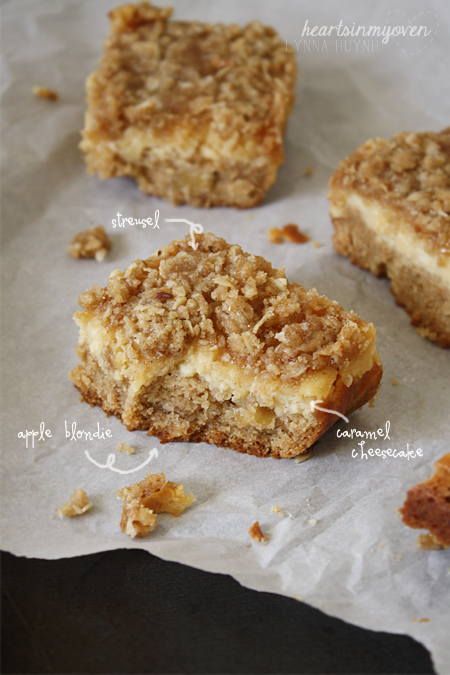 Shelly has created many dessert bars in general, which is the opposite of what I usually bake. Well, aside from my brownie practicing a few months ago. Haha. I wanted to challenge myself with this contest and since I`ve never baked blondies before, I decided to give it a try.

So, which recipe did I “put a spin on”? Three. Yep. I combined THREE of Shelly`s recipes to create this wonderful bar dessert.

I adapted slightly her apple toffee blondies to make the base for these bars. The cheesecake layer is a combination of her caramel apple cheesecake and brownie bottom caramel cheesecake bars. Then, I just added some streusel to top it all off! Also, totally optional: you can drizzle some caramel sauce on top. Bam. 🙂

Unfortunately, I made these in an 8×8 inch square pan, so there are only 9 servings. Fortunately, I did because they`re so good, I would eat them all myself! 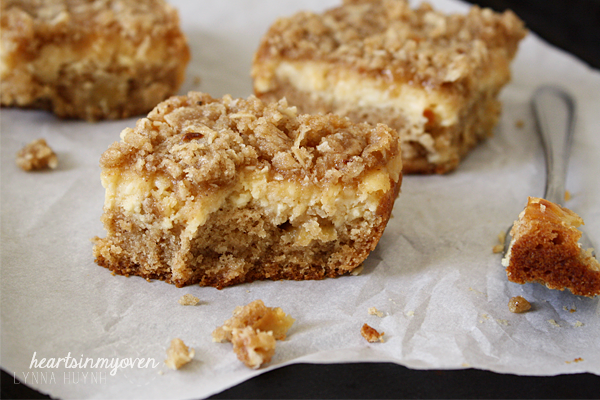 Caramel Cheesecake Apple Blondies
Adapted: Shelly/Cookies and Cups: 1, 2, 3| Yields: 9-(2inx2in) squares | Level: Easy-Medium | Total Time: 2 hours + about 4 hours chilling time | Print
Directions:
1.      Line 8×8 inch square pan with parchment paper/or grease with butter.
2.      Preheat oven to 350°F.
Apple Blondie Layer:
3.      In a mixer, cream butter and brown sugar until smooth.
4.      Add in egg and vanilla and mix to combined.
5.      Add the flour, cinnamon, baking powder, and salt and mix to just combined.
6.      Use a spatula and fold in chopped apples.
7.      Transfer to pan and bake for 10 minutes.
8.      Remove from oven.
Caramel Cheesecake Layer:
9.      While blondies are baking, in a large bowl, cream the cream cheese until smooth.
10.  Mix in the vanilla, sugar, and egg until just combined.
11.  Stir in the caramel until combined.
12.  Spread on top of blondies.
Streusel Topping:
13.  In a medium bowl, combine the brown sugar, sugar, flour, and ground cinnamon.
14.  Cut in the cold butter using a pastry cutter, or 2 forks, until mixture is crumbly. Spread on top of cheesecake layer.
15.  Bake for an additional 25-30  minutes, until the middle is set and top is golden.
16.  Drizzle caramel sauce on top, if desired.
17.  Allow bars to cool for about an 1 hr before refrigerating completely or overnight before serving.

“I am entering this Caramel Cheesecake Apple Blondies in the Creative Recipe Contest hosted by Confessions of a Cookbook Queen and Cookies and Cups!”