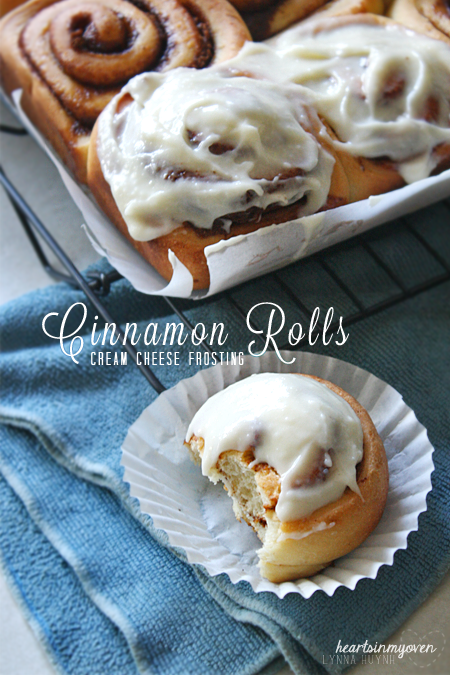 This season is all about the comfort foods. I mean, mashed potatoes, cheesy casseroles, warm chowder…you get the picture, right? I thought, why not enjoy some cinnamon rolls, too? They are decadent and a total comfort food. A perfect treat, too.

However, before I start, I just want to introduce to you to a few new things around here! I finally got my own domain for Hearts In My Oven!! Which means you can now visit me at www.heartsinmyoven.com!! Don`t worry if you`ve saved my old recipes, it`ll just redirect you. But, please change your bookmarks or feeds, if you can. I know it`s a hassle, but since this blog is growing, I figured this is a smart move. Thank you! 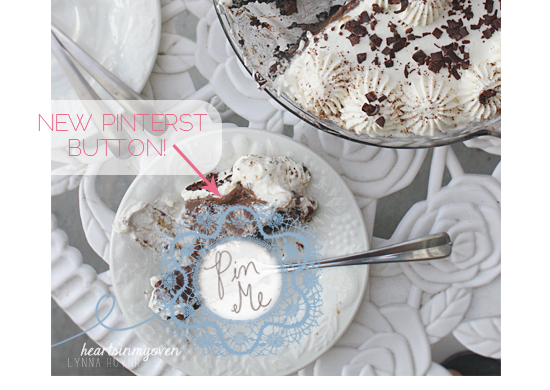 Do you have Pinterest? Have you checked out my new Pinterest hover image yet? Isn`t the lace detail, ADORABLE? I`m in love with it. If you want to pin any image on my blog, just put your mouse over the image and click on the “Pin Me” image that pops up. I`ve always had this feature, but never introduced it formally in a post because it was getting so popular, I figured you guys are smart and would figure it out. 🙂

Speaking of RSS Feed readers, I don`t know about you, but I was an avid Google Reader user. Unfortunately, Google stopped it in July. If you want more RSS feed reader options, aside from those offered above, there are MANY! I`ve tried almost 10 before settling on one. A quick Google search of alternatives, will give you many. Personally, I like InoReader and Feedly the best. I`m currently only using InoReader, though. I find it much each easier to use and edit my subscriptions than other readers. 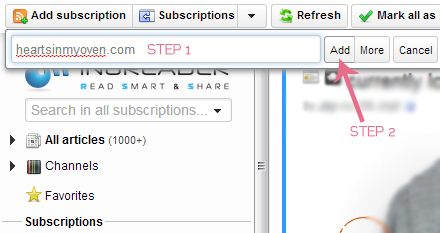 Once, you`ve decided on which reader you would like to use, it`s really easy to add Hearts In My Oven to your reader. All you need to do is click “Add Subscription”, type in www.heartsinmyoven.com, and click “Add”. Done!

Okay, back to these great rolls… 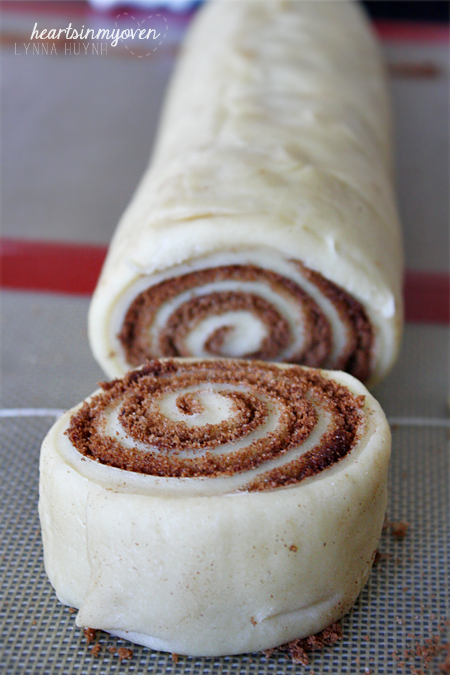 I`m extremely excited about today`s post because I`ve been dying to make cinnamon rolls from scratch for over a year now. Unfortunately, homemade cinnamon rolls from scratch requires a huge time commitment…which most people cannot afford, including me. This is why I`ve made this cheat easy version before. Another reason I have avoided these is because of the yeast. I`m always afraid I`ll kill the yeast so my dough won`t raise. I`m not sure why I`m so afraid. I`ve worked with yeast twice now and I haven`t killed the yeast YET. But, there was one incident. Over a year ago, I used frozen bread dough to bake and the dough never doubled its size like it was supposed to. I mean, I wasn`t even working with yeast directly since the dough was premade, yet, after that failed incident, I just didn`t want to work with yeast-type dough for awhile.

A while ago, I decided to suck it up and face my fears working with yeast and commit to these delicious cinnamon rolls. I`m totally glad I did. You don`t even know how proud I was after making these! 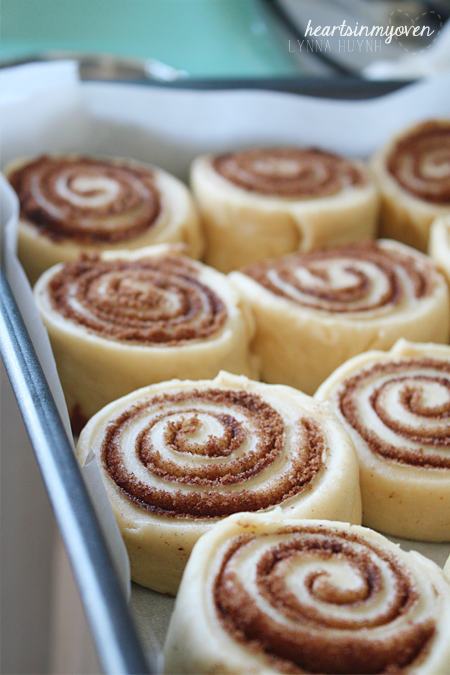 I mean, look at all that cinnamony awesomeness!! These cinnamon rolls are pretty big. They`re the thick  and big rolls you order at a bakery or purchase from the grocery store. I left some rolls unfrosted in the first picture so you can see. 🙂 Don`t pay too much attention to the small little one alone. That one is a special smaller one. All these rolls are rectangular in shape.

I`ll admit, it was hard for me to wait and be so patient while the dough was raising. I mean, I had to do it twice! The good thing about the down time is that I can clean up while the dough is raising. By the time I was done frosting these beauties it was nearing dark. I`m thankful it was summer, so the sun was still out at 6:30pm for me to take pictures.

The recipe is long, but if you ever have time to make these wonderful rolls, do try! They`re so good, you won`t regret the effort you had to put in to make them. Read my notes at the bottom of the recipe on ways to save some for later. I knew for sure I couldn`t allow myself to devour all 12 myself, as much as I wanted to… Haha. 🙂

Cinnamon Rolls with Cream Cheese Icing
Adapted: The Best New Recipe | Yields: 12 rolls| Level: Intermediate | Total Time: 70 minutes + 4 hours resting time | Print
Directions:
Dough:
1.        In a small saucepan, heat milk and butter until the butter is completed melted. Remove from heat and let the it cool down until about 100°F.
2.       In a large bowl with an electric mixer (use paddle attachment), mix the water, yeast, sugar, egg, egg yolk until combined.
3.       Next, on medium speed, add the salt, milk mixture (from Step 1), and 2 cups of flour into the mixture until blended.
4.       Switch to the dough hook, add 2 cups of flour, and knead on medium speed until its smooth and not sticking to the sides of the bowl anymore (about 10 minutes).
5.       In a large metal bowl, lightly oil bottom and sides of the bowl.
6.       Make the dough into a ball and transfer to bowl. Cover the bowl with plastic wrap and set it in a draft-free spot (such as your unheated oven), until dough doubles (90-120 minutes).
Cream Cheese Icing:
7.       In a bowl with an electric mixer, with a paddle attachment, beat your cream cheese a little.
8.       Add the corn syrup, milk, powdered sugar (shifted!), and vanilla extract and mix until combined. Increase the speed once it’s well combined and continue mixing until its smooth, without lumps.
9.       Transfer icing to a bowl and cover with plastic wrap touching the surface. Chill until ready to use.
Filling:
10.   In a medium size bowl, whisk together the brown sugar, cinnamon, nutmeg, and salt. Set aside for later.
11.   When the dough is doubled: Lightly flour a clean work surface.  Transfer dough and press it down.
12.   Roll the dough into a 16x12inch rectangle with a lightly floured rolling pin. (Have the long side of dough parallel to you–i.e. facing you).
13.    Lightly brush the dough with melted butter (lightly!).
14.   Evenly sprinkle the filling on top and pat down gently into the dough with the palm of your hand.
15.   Starting from the long side closest to you, roll towards the opposite end as tightly as you can. Use either a little bit of water or melted butter to seal the ends. Pinch edges to seal.
16.   Line the bottom of a 13x9inch baking pan with parchment paper.
17.   Using a unflavored string of floss, cut the rolls into 12 equal pieces. (Slide the floss under the roll and wrap it around the roll to cut/slice.)
18.   Place rolls, cut side up in baking pan. Cover pan with plastic wrap and set it in a draft-free spot, until dough doubles in size (90-120 minutes).
19.   Once rolls are doubled in size: Preheat your oven to 350°F.
20.   Bake rolls for 25-30 minutes, or until tops are lightly golden brown.
21.   Let rolls sit in pan for about 5 minutes before removing to a cooling rack to cool down.
22.   Spread cream cheese icing on top after cinnamon rolls have cooled for at least 15 minutes.
*Notes:
–          These rolls are best served immediately, however, you can definitely reheat in microwave for 20-30 seconds and it will taste just as good!
–          Alternatively, you can freeze frosted rolls individually, doubled wrapped with plastic/saran wrap for up to 3 months. Defrost in fridge the night before you want to eat and microwave for about 30 seconds each.